Fashion is ever changing, and Haute Couture is “the best laboratory [to experiment in] for fashion design”. Parisian designer, Julien Fournié, chose to enter the world of custom fitted garments not only because of the tradition of couture lying in Paris’ history, but also because of its role in the changes of fashion and his strong belief in its future. On January 24, 2012, Fournié presented his Spring-Summer 2012 couture collection, Première Extase, at the Showcase as a membre invité by the Chambre Syndicale de la Couture Parisienne. 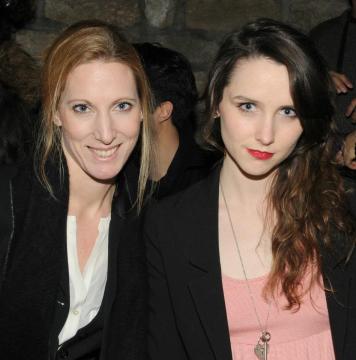 Me with Quinn of Quinntessential Style front row at Julien Fournié

This young designer is fashion-forward, maybe even ahead of our time. While working on his collection, he collaborated with Fashion Lab, created by Dassault Systèmes, a technology incubator which enables the collection design process to transform its 2D aspects into 3D, allowing the exploration of line within the designs. “Thanks to an original online digital library, [designers can] investigate materials to visualize, study, improve a virtual prototype before they make the real-life… piece, accelerating and enhancing thus [the] creative process before they get to work on the real-life mannequin”. With such advances in the design process, “codes of Haute Couture are being redefined for generations to come”. Considering the ‘trickle down theory’ of fashion, eventually standardized sizing may not be necessary, made-to-measure garments could be more readily available at lower costs.

His collaboration with Fashion Lab is a reflection of his belief in the future of fashion and how “this field of excellence will develop” especially if it continues to include future technological improvements. Fournié and Fashion Lab worked on reproducing fabrics’ would-be reactions, using digital tools. A few kinks need to be worked out though in regards to the custom fit of the garments, which became apparent with the tugging of several hemlines.
All in all, the end result of this technological partnership birthed a line of youthful, vibrant, tropical looks from the ‘Garden of Earthly Delights’ 2.0. To the soundtrack of a thunderstorm, Fournié’s ethereal beings guided us through a rainforest. Some dresses resembled hibiscus flowers with pleated, undulating yellow and pink floral structures blooming from the shoulder and wrapping around the body. Others sprouted plastic fringe that reinforced the rainstorm soundtrack with every swish of the hip.

Julien Fournié at the Showcase (Images by Quinntessential Style) 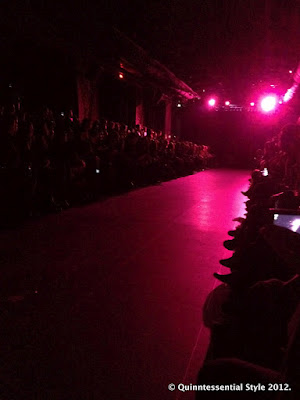 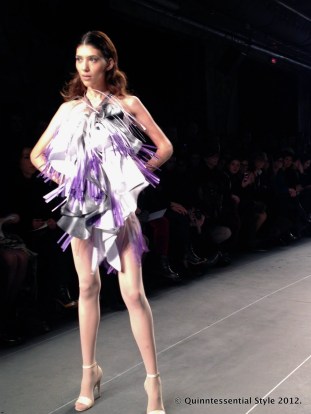