This year Paris FNO happened on the rue du Faubourg Sainnt Honoré.  I thought it would be a mixture of avenue Montaigne and Faubourg Saint Honoré, but avenue Montaigne did not participate at all. There was a slight improvement from last year, meaning access to many stores was less strict, but I was again left with a an annoyed feeling that they still haven’t understood the purpose of this event.

Some stores denied access to us, claiming that theirs was a private party and we had to have had a special invitation.

Fashion’s Night Out is supposed to be an event for the promotion of fashion to the general public, since for these luxury brands it is generally an exclusive concept for only those who have the wallet power to own a piece. As I understood it, the gist of FNO was to give everyone a chance to discover fashion and luxury brands (even if they won’t necessarily buy a pair of shoes for 600€ or a coat for 2000€), the point is to recruit new fans, who could perhaps afford a small accessory or just be another vector of the brand (via facebook check-ins, or photos shared on twitter and Pinterest). The point is to create some hype. Not sit with one’s nose in the air and pooh-pooh at the little people! For one night only, can’t these brands participate and make their brand a little less haughty? 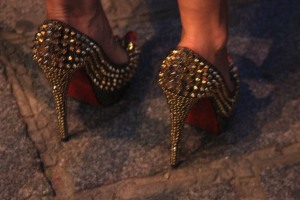 Okay, my rant is over. Thank you for reading thus far. Despite the annoying reminder that Paris still harbors the  prize in Fashion snobbery ( well earned title mind you), we did however enjoy a few macarons and glasses of champagne at Prada, and Lancôme among other stores who welcomed us in and exposed their frocks on pretty models like at Bluegirl and La Perla. Lancôme was doing makeovers (the crowd of waiting fashionistas was très grand, so we sufficed ourselves with bubbly and testing the new perfume La Vie Est Belle.Many of the cosmetic brands were doing make-up demonstrations or applications for guests along the Saint Honoré street. It was nice to see some kind of initiative from them to do something a little bit more involved rather than just open up the shop a little longer and serve refreshments.

While sauntering from one boutique to the next we noticed that the crowds were a still rather thick, but then what do you expect on the narrow sidewalks of the Saint Honoré neighborhood. It was nice though to see models milling around and people dressed up in their fashionable best. At least the general public knows what FNO is all about! I bet if we did FNO Paris next year in the Marais maybe, just maybe the event would lose some of its stuffy better-than-thou attitude…

But my complaining aside, a night is not lost completely where there is champagne involved, and what’s not to be happy about, sipping a flute of it and browsing luxury fashion… And I hope that next year we will see some REAL improvements on FNO Paris. Until then, enjoy Lauren Cahswell’s gorgeous video of our FNO Paris experience! 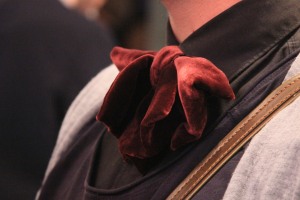