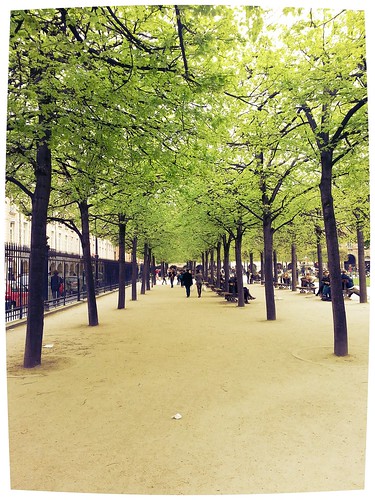 I literally wrote “Sprintemps” in the title before correcting it to “Springtime”. I think my franglais has gotten a little out of hand. But that isn’t the subject of this post. Or is it….

If you listen closely in the beginning of Springtime in Paris, you can almost hear a collective sigh.. Aaaaaaaaahhhh! The light comes back and we all feel a release of pressure as we emerge from under the gray skies.

I wanted to illustrate Paris this Spring; not that it needs doing… for Pete’s sake, every blogger and their brother is posting pretty blossoming photos of Paris these days. But really, it cannot be helped when you live here. This isn’t to say that living in Paris is all cherry blossoms and pink sunsets…far from it. Paris also includes in the package : tired legs, aching feet, angry fellow metro passengers, (enjoy this funny parody about an “incident” on the metro), pushy people on buses, pushy people everywhere, umbrella wars when in rains, unreliable transportation, interminable lines at any public service office, insurmountable amounts of paperwork in order to get anything done… oh people, I could go on for at least 100 more of these… but that’s not the purpose of this blog post. Or is it…. END_OF_DOCUMENT_TOKEN_TO_BE_REPLACED

Chéri and I took some time on a Sunday in early November to just have a lovely lazy stroll around the park down the street from us (two actually), the new Martin Luther King park and the Square des Batignolles. It was somewhat of a Fall Colors stroll, since that is what we did in New England where I grew up, sought out the Fall Colors.

Granted the colors here pale in comparison to those found in Conneticut, Vermont, New Hampshire and Massachusetts, but it was a quintessential Fall afternoon complete with crisp air, blue skies, birds of a feather, and the kind of weather that makes you hold each other closer… One of the best kinds of weather (second only to the lounging on a chair by the sea in Italy weather…) Hmmm Mmm! END_OF_DOCUMENT_TOKEN_TO_BE_REPLACED

END_OF_DOCUMENT_TOKEN_TO_BE_REPLACED

the row boat race, I have decided to postpone until next Saturday, July 21st.

I use this site for weather updates :

With so many tourists visiting Paris every year looking for great deals, it’s hard to imagine that there are still some places that are relatively unheard of. Away from some of the more popular attractions, there are however various monuments that are equally as impressive. One of these is the Château de Chantilly – a beautiful castle located in one of the largest forests near Paris, Le Massif de Trois Forêts, in the town of Chantilly. It is home to the Grand Stables, various courtyards and gardens, a lake and the Musée Condé – one of the country’s finest art galleries. END_OF_DOCUMENT_TOKEN_TO_BE_REPLACED

The craziness of September is past us now, the return from vacation and all the things that have piled up while we were away have hopefully been ticked off the to-do list. The fashion week frenzy has subsided. My Blog-anniversary has come and gone, and my human life one looms up in front of me… It’s about time for some calm and tranquility.

For this, I head to  the eastern side of Paris, where I enjoy the Lac Daumesnil.

I love the Lac Daumesnil. Nestled in the bois de Vincennes, on the edge of Paris, lies this lovely lake, where swans have found a home, duck families, a row boat rental company and where many Parisians go to breathe some slightly more fresher air on the weekends, and joggers go to shed a few pounds by trotting around the circumference of the lake.

A beautiful piece of outdoors in Paris, the lake offers a romantic setting for a stroll with your chéri(e) or a paddle in a boat where you take a few snapshots of the swans…there is even a charming little gazebo in a hill and a man made grotto for lovers and friends to share for a kiss or a warm embrace.

To get there, take the metro line 8 and get off at Porte Dorée. Head up the hill towards the gold statue/fountain, and veer towards your right, take the footpath into the sparsley wodded area and cross the parking lot street, you will see the boat house for the row boats. And Voilà, there you are…. Enjoy!

I was at the Champs de Mars recently when the weather was nice, with a few friends and chéri, for a little apéro picnic. Picnicking seems to be a thing that has become a phenomenon in Paris. Maybe it has something to do with the soaring restaurant and drink prices in Paris….

Whatever it is, everyone is doing it.

But there is a rising problem. The panhandling, alcohol and trinket selling, pickpocketing people roaming amongst the picnickers. There used to be one or two that would accost you over the course of you evening on the Champ de Mars. But they now come out in droves literally. And of all ages.

There are little kids who look like they are about 8 years old (judging by size, but if you look at their hardened faces they look about 50 years old). These kids have obviously been trained and they are supervised by one or two grown men that you may notice roaming around with absolutely no indication that they have a purpose there. The kids work in small groups to panhandle/pickpocket the people sprawled across the green. And they are very insistent. Their best technique is to distract you with one or two insistent members of their group, and another one will slip his or her little hand into a bag, purse or pocket and grab whatever is available.

I saw the same group of children ALL evening, cross the green several times.

In addition to the groups of children there are men who sell Eiffel tower trinkets and other crap, they are less aggressive than the children, but they do come over to you and shine their colored lights on you so you will notice them. There are men walking around with buckets and backpacks as well selling beer and wine (illegally) to picnickers. There used to be one or two, maybe four an evening, now they are there by the dozens and they will solicited you every five minutes. I NEVER let go of my bag and kept it on my shoulder the entire evening. That’s how bad it was….

At one point the other evening, one of the guys selling alcohol got angry at a guy selling trinkets and I saw him storm over to the trinket seller bottle in hand about 20 feet away from us. He took a big swing with the bottle, aiming it at the man’s head. THANK heaven he missed! The bottle went flying to the ground several feet away and somehow managed to miss hitting anyone. The two men took to their fists. And would have had a real dangerous fight had their “colleagues” not pulled them apart.

My advice to you, if you plan on picnicking on the Champ de Mars below the Eiffel tower.

-Do not carry much cash on you

-Do not bring expensive cameras or electronics, and if you do bring a smartphone/cellphone, keep it zipped or snapped in a VERY   secure place.

-Ladies, keep your bag on your shoulder, or in your lap and wrap a handle around your arm or wrist. The thieves will come VERY close to you.

-Picnic in small groups, you will be less of a target.

-Be CONSTANTLY on the lookout.

You may want to consider picnicking in other parks : Les Buttes Chaumont 75019 is nice and there are little to no pickpockets there (yet). But the best thing you can do is be prepared : have photocopies of all credit cards (front and back) plus photograph or scan your cell phone identity numbers found on the inside of your phone, plus the SIM card; leave passports at home, and have a very secure bag as well as keeping electronics out of site, and keep your eyes open.

Hopefully you will then be able to enjoy your picnic under the Dame de Paris!

With my friend Frankie!

Originally scheduled for June 18th, I began scrutinizing the weather forecasts a week and a half before that date. None of them looked positive. Thundershowers. Not good weather to paddle around on the lake under! The day before, the weather forecast was so disheartening that I canceled the regatta and rescheduled. When I woke the next morning and looked out the window I saw bright sun streaming through the clouds. I shook my fist and cursed the sky to pour down rain. It did eventually that afternoon, in violent bursts with strong gusts of wind, so I felt quite validated in canceling the regatta.

The rain date came around and the same anxiety over the weather came over my head like a little pooh-bear rain cloud the week before. And some weather reports predicted rain, others did not. I said to hell with it, I’ll be there rain or shine! And if no one else shows up, I’ll have a bottle of rosé champagne to pop and I will serve myself glass after glass of champagne in a rain filled row boat if I have to! (Very dramatic, I know… It’s all part of the rough life I live as an expat blogger in Paris). 😉

Well the day came and the contestants showed. A small crowd of ten, we  claimed our picnic spot on the island, and the rowers set about figuring out how to man the oars. Sab, from the meet up group Paris if You Please who helped me organize the event, came with his lovely wife and adorably squish-able son. Other contestants, Satyam and Linda tried the strategy of let the others drink a few glasses of wine first in order to gain advantage over what they hoped would be some pretty swerving rowing… Steve’s strategy was to have a past career as a professional rower, that helps a lot. Estela and Sly played it cool and cute, pretending they were there only for the romantic aspect (being the newly weds that they are). In the end Steve’s boat won and they shared their champagne all around!

And not a drop of rain fell the entire time!!!

Cheers to all who joined in the fun and see you next year!

A pretty little square in the 8th, with a chapelle, where the remains of Louis the XVI and Marie Antoinette were lain for 21 years, until their remains were removed by order of Louis the 18th, January 21st in 1815 to the cathedrale of Saint Denis where most of the other French kings and queens are buried.

Visit the chapelle or relax in the park.

The square is openat 8am on weekdays and at 9am on Saturdays, Sundays and holidays. It closes at 8:30pm during the summer (during winter I am assuming it’s earlier than that. The time was not posted.)