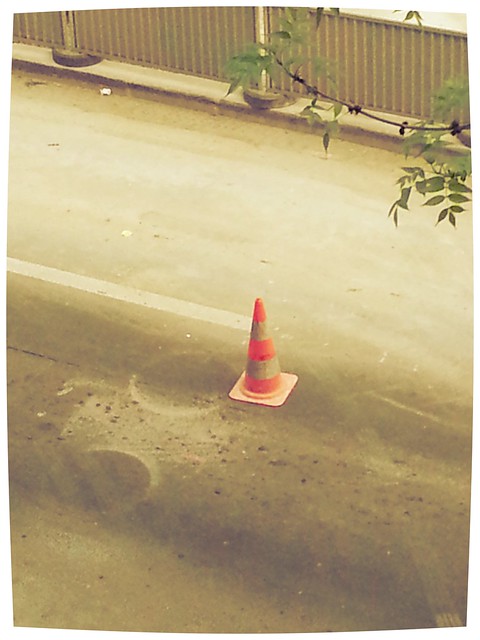 This was going to be a rant, but the situation became rather humorous to me, so I may include more dry irony than exclamation marks.

Since we moved, I have been frequently ordering things for the new home (ie. furniture, decorative elements etc.) Getting them delivered has proved to be quite the hassle. At first I thought it was because the intercom on the ground floor had not been changed to include our name and the deliveries were unable to include my detailed instructions on which name to buzz. I eventually scotch taped our name over the old occupants’. Six months after our entry in the building, the name was finally changed. But for some reason all these efforts didn’t help to make deliveries happen smoother.

So… regardless of all these difficulties in getting my purchases delivered, I still seem unhindered in ordering things to be delivered. Of course, i really don’t see any way around it, as I don’t have a ton of time to go from boutique to boutique looking for the perfect decorative item nor do I have a vehicle to be driving my furniture purchases around.

In that regard, I spent months measuring and browsing online for an armoire so Chéri and I could finally get all of our clothing out of boxes and onto shelves and hangers. In our bedroom, the corner where the armoire was destined has some quirky angles and thus the armoire had to be no larger than 114cm. I found many perfect ones, but that were just a centimeter or two too big, or they were waaaaay over my budget, or they were really poor quality, or just terrible looking. (Okay so I am picky). But I finally found one on a popular home décor site in France. I don’t know how I over looked it before, but there is was perfect, the right size, Chéri liked it, I liked it, it was marked available for delivery under 7 days, it was a done deal. So I clicked on the “buy” button and we were the happy owners of a new armoire. It just had to get delivered. The email I recieved after making the purchase, told me I would be contacted to schedule a date for delivery. A few days later the call came, and I haggled with them but they wouldn’t delivery in 7 days. I fumed on the phone but to no avail. I settled on a date where Chéri was available but I was. Little did I know that my presence would have been futile at that rendez-vous. They were to call us the day before and give us a time frame. Oh great, so we have to wait to schedule ANYTHING until the delivery gods are willing to let us know what time the will arrive chez nous. It could be at anytime  during the day. Wonderful. The delivery date came and Chéri was wonderful and made himself available at the time they had indidated the day before, early morning. But try as they might, those delivery guys could not get the beast of an armoire up the stairs not int he elevator. It was too big. Had to go in through the window. For that, we would have to make another appointment.

I called, and inquired and was to that the apparatus to have the furniture brought up through the window would be 300e euros more. YIKES! This armoire was turning out to be more trouble than it was worth. But the kind girl at the customer service, Maggie, took pity on my and gave me a number for another service that would take care of the lift charge for less under 200 euros. Eeeep! But I guess I had to bite the bullet. At least the armoire had been way under my budget. So I called the number she gave me, the only thing was, that 200 euros was only going to buy me an hour of time and I needed to schedule it now. The delivery people required a span of three hours. ARRRRG! I explained my dilemma to the lift company who was kind enough to suggest that I call the delivery company and try to request a specific time. I called the delivery company back, and begged them for a specific time. (Mind you this is all happening sporadically over the course of several days because of opening and closing hours and my day job, all these phone calls could not be made all at once. We do live in France you know). The refused to give me a specific time, so I begged to be put first on the schedule, hoping I could gage the timing accordingly. They said they would note that on my file but they couldn’t guarantee it. I explained my issue about having to schedule a lift. They again repeated that they couldn’t guarantee it but would make a note of it. Then I called Maggie back. She had been so nice, I figured I could get another ally on my side. She was wonderful, and said she would also push for the delivery people to make sure I was first on the list for our scheduled day. I informed the lift company, and scheduled with them, on a hope and a prayer.

The day before the delivery, we got a message from the delivery company saying they would deliver between 7:30 and 9:30 the next morning. I was a little worried that it would be closer to 9:30 and called the darling people at the lift company and pushed our rdv forward a little to8am instead of 7:30.

Boy and I glad I did that.

So the next morning, Chéri and I were up at the crack of dawn, to shower and dress for work and hopefully receive an armoire before heading out the door. Part of me was still expecting the delivery people would show up at 7:30, but since I had pushed the lift schedule up, I was worried now. 7:30 came and went, no sign of anybody. I was pacing the apartment like an anxious lion. At 7:50 we saw the lift truck pull up. 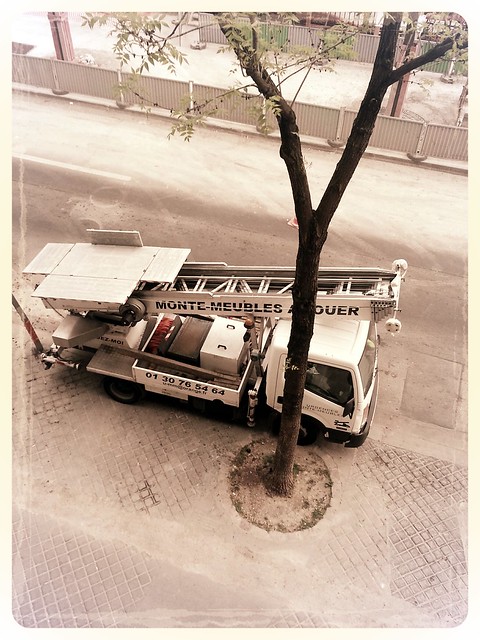 We waved and shouted bonjour to him out of the open window. It was then that I noticed a new problem, one which our lift guy confirmed. The road work that has been on our street for months, decided that this was the morning to change barrier sides and block all traffic on the lane closest to our building. Of cooooooooourse! Of course they would do that this morning. OF COURSE! And apparently, no parking by any vehicles would be allowed after 8am – in oh 10 minutes! I could only laugh.
I took my strees, tossed it out the window and said, well, if they make it they make it, if not, oh well. It’s just money, and time. But I can’t get sick over this darn armoire anymore. It had been a few weeks of hassle over the phone, so why would the hassle stop now?!? I might as well not let it crush me. The lift guy installed his rig. At least we were prepared. 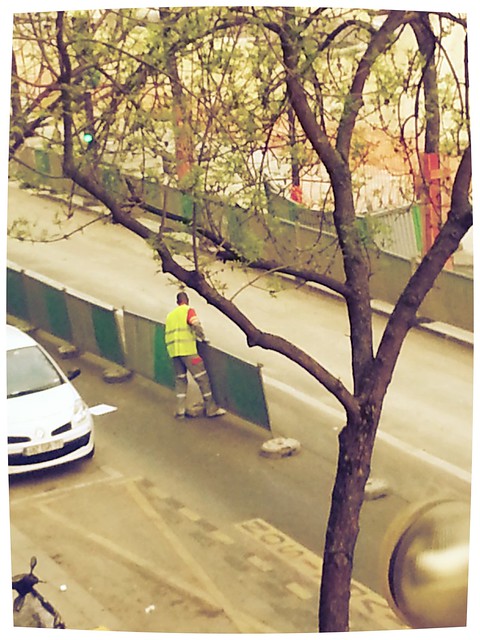 We contacted the delivery company but got they before/after hours recording. Great. But then Chéri remembered that there was a number included in the text message he’d received the day before confirming the delivery time. We called that number and got a human on the line. She said she would contact the driver and see where they were. We waited for like 5 minutes but it felt like 30. We decided not to wait and called back. The human on the line told us they were very close and would be at our place shortly. I looked out the window to see more barriers being moved. I didn’t see how they were going to get down our street…

And just when I figured it would never happen, I saw out the window, down on the corner a truck with two men pulling a VERY large item out of it and pushing it down the sidewalk on a trolley. Halleluiah! My lift guy gave me a thumbs up, and got his apparatus ready. 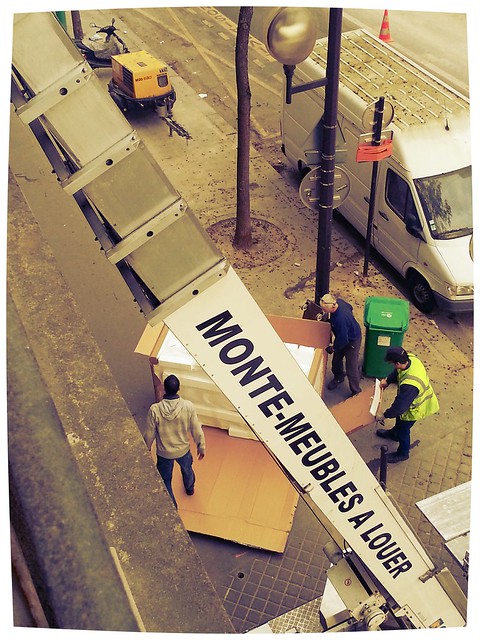 They men arrived below, and I saw both the delivery guys and the lift guy, work like beasts to get that damn armoir up on the lift. They tore away the giant cardboard box that was protecting it, and then carefully lifted/slid the enormous “moby” onto the lift. I wasn’t sure it would hold for a minute! The lift guy strapped it on like a pro. Chéri opened the door below for the delivery guys who came huffing and puffing into the apartment and waited to receive the thing through the window. 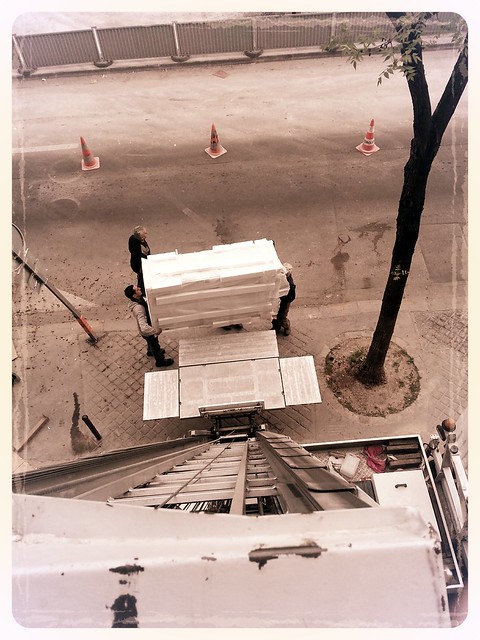 A button was pushed and up it came, with a slight wobble at first. Chéri and I both helped ease the armoire off the lift. It was FINALLY in our apartment. And it was HUGE! I started having doubts that it would fit in the small corner of our bedroom. The styrafoam protection was torn off, and the four of us guided the whale of an armoire down the hallway into the bedroom. It slid perfectly into the corner. I sighed the biggest sigh of relief. I left Chéri to finish with the delivery guys while I went to pay the lift guy and thank him profusely. It was 8:25am. 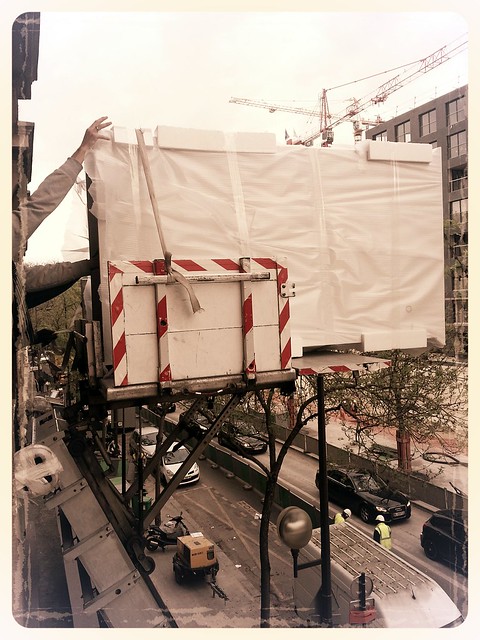 Seriously people, this must be why so many of us buy so often from Ikea.

I could hardly believe it was delivered, on time, it fit, and I was even early for work that day!

There is no moral to this story though, except : Only in Paris!!! 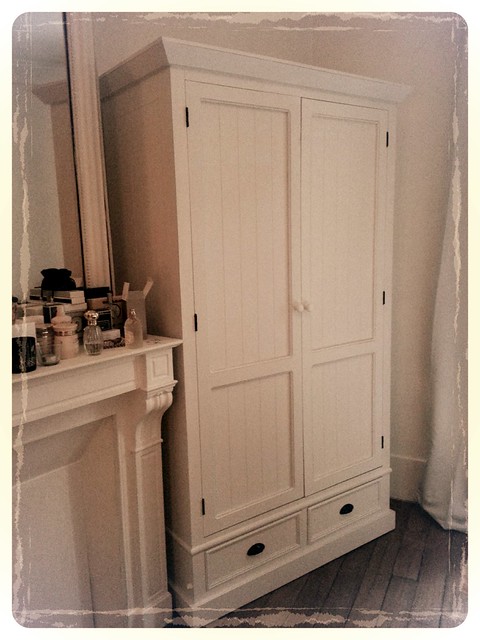 4 thoughts on “Delivery in Paris – “Moby” the Armoire”